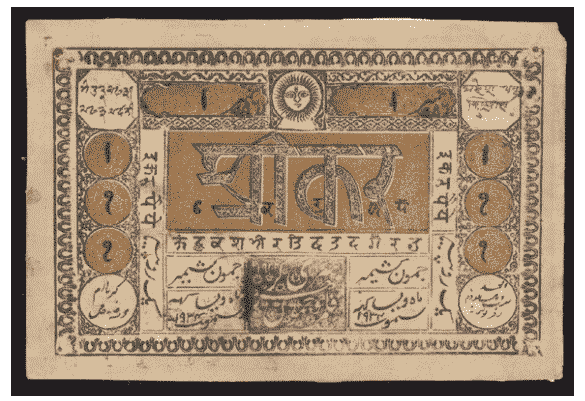 The first One Rupee Banknote was issued by the State of Jammu & Kashmir in 1877, through its treasury with limited circulatory liabilities. They bear the signatures of Diwan Kirpa Ram as the chief signatory and other officials. The vignettes depict a sun face and the words ‘Shrikar’ in bold letters in center. Issued notes bear a Persian seal impression below ‘Shrikar’. The currency notes were used only for payment to the state treasuries of land revenue and other government dues and not used by the general public for common circulation.

First One Rupee banknotes for circulation for general public was issued on November, 1917, due to the first World War 1914-1918 there was shortage to metal and need to conserve metal lead to the introduction of paper currency of small denomination for the first time in the year 1917. These notes were Printed in England on white handmade paper and had watermark of Star and had a eight language panel at its back. (Size of 70 X 127 cms) It was issued under three signature of M.M.S. Gubbay, A.C. McWatters and H. Denning 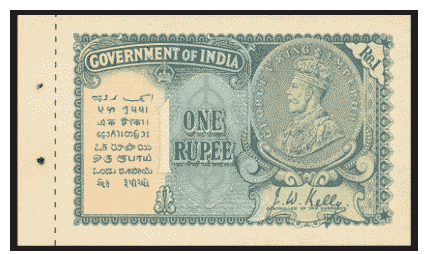 First Second Rupee banknotes for circulation for general public was issued on 24thJuly, 1940, with the Signature of J.W. Kelly, these were printed in England as well as Currency Note Press, Nasik. Size of banknote was reduce to 54 mm X 92 mm. The Issue of 1917 and 1935 were issued in a packing of 25 Banknotes with perforation on left side, stapled together in the form of a Cheque book 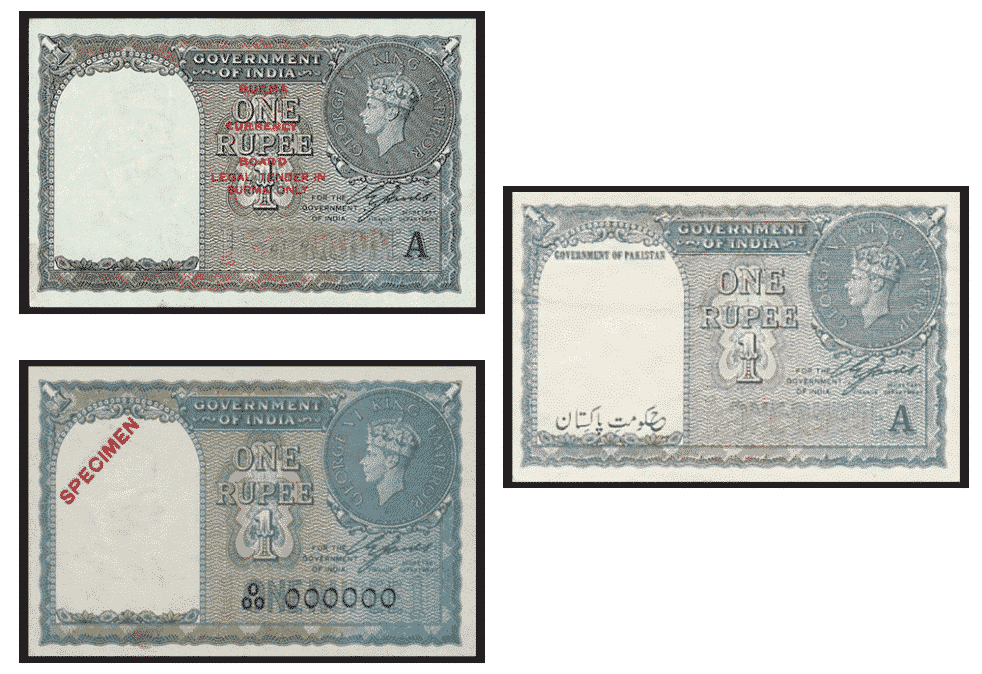 First Second Rupee banknotes for circulation for general public was issued on 1940, but was issued in year 1944 and were withdraw on 27th October, 1957 again the Size of banknote was increases to 64 mm X 101 mm, with serial number of Banknotes in Black, Green and Red Colour Ink, some of these notes were also overprinted for use in Burma in 1945 with Red Colour Ink “ Military Administration of Burma” and “Burma Currency Board”. In 1947 these notes were overprinted on the Watermark in Green Colour Ink in English “ Government of Pakistan and in Urdu “Hukumat-E-Pakistan”. 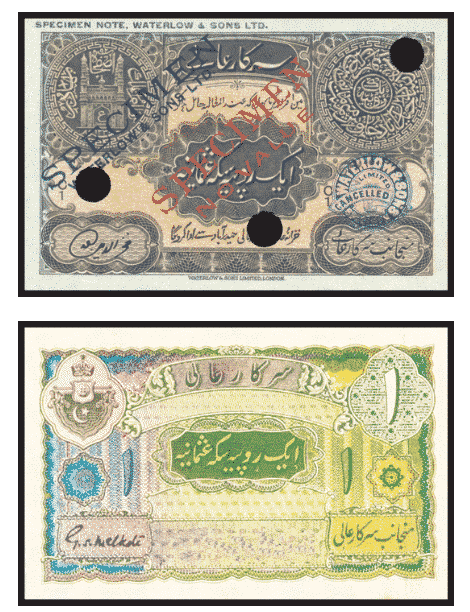 Hyderabad was only Princely State to have issued One Rupee Banknotes on a regular Basis from 1917-1952, the last few years under Indian Control. The first issue was printed Waterlow and Sons Ltd. but the second issue was printed Currency Note Press, Nasik.

One Rupee Banknotes was also issued by Indo-Portuguese in the Territories of Goa, Daman, Diu and Dadra & Nagar Aveli and by Indo-French Territories of Pondicherry, Chandernagor, Yanaon, Mahe, Karaikkal. 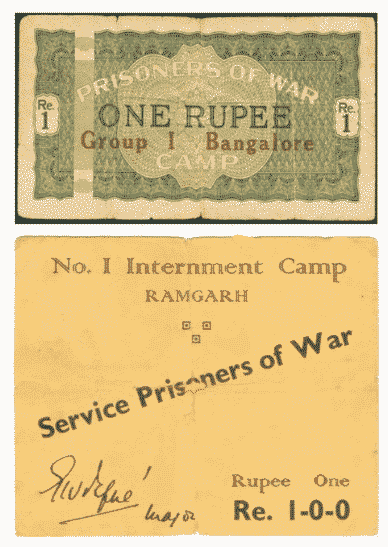 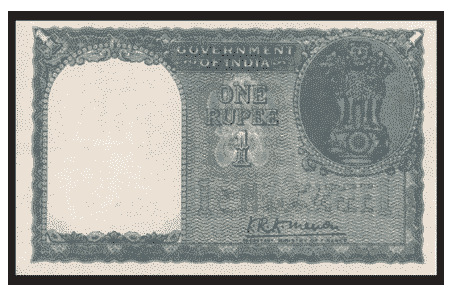 In 1948 on the death of Mahatma Gandhi, a one Rupee banknote was proposed to be issued with Signature of Shri K Narhari Rao, but it was only issued on 2nd
October, 1969 on Mahatma Gandhi Birth Centenary with signature of I. G. Patel as Special Secretary, Ministry of Finance.

The first one Rupee banknotes of Republic India was issued on 12thAugust, 1949 with signature of K.R.K. Menon, Secretary, Ministry of Finance with the picture of the Lion Capitol of Ashoka Pillar (Mauryan Period, Circa 4th Century B.C.) replaced the King’s portrait and without the picture of One Rupee Coin. 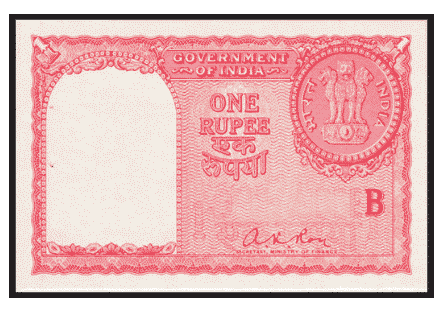 A special Issue of One Rupee Banknote was also issued for the Persian Gulf Countries with coin date of 1957 and Signature of A.K. Roy and it was issued on 11thMay, 1959, It was printed in Pink Colour and its Serial Number Started with “Z” 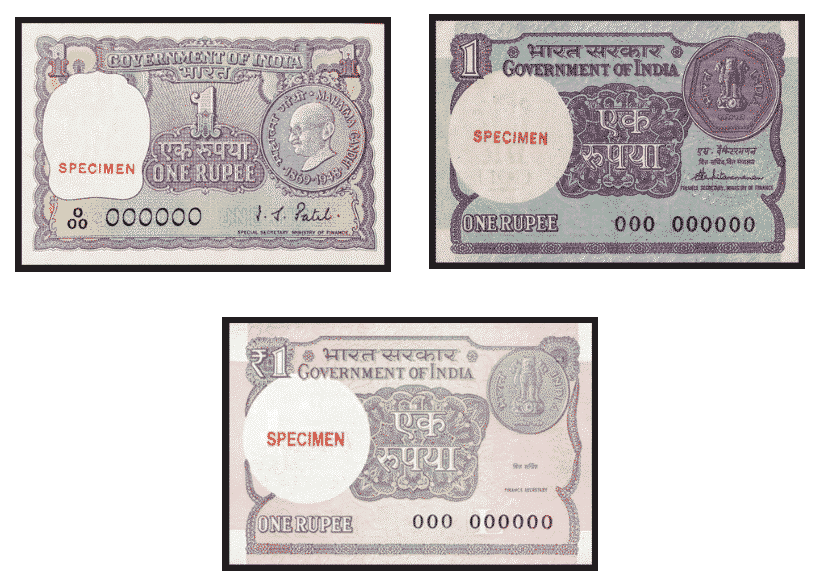 In the year 1963 the size of the one rupee bank was again reduced to 9.7 X 6.3 cms and also the design and get up of the banknote was also changed. In the year 1969 Special Commemorative banknote was printed on commemorate the birth century of Mahatma Gandhi. In the year 1981 the design the colour and placement of image of one rupee coin was changed in the one rupee banknote. Republic India of finance and accounting One Rupee Banknote is considered as one rupee coin only, One Banknote issued by the Government of India and not by the Reserve Bank of India and it is at par with the one Rupee Coin and except two one Rupee Banknote, all one banknote had a image of the Coin in the year in which it was issued except for two years. In all 61 Varieties of One Rupee Banknotes was issued in Republic India from 1949-2016. In the year 1994 the printing of one Rupee banknote was discontinued because of the High Costs of Printing and lesser life of banknote than a one Rupee Coin, but again in 2014 to overcome to shortage of one rupee coin in the market it was again decided to issue one rupee banknotes with the signatures of Avrind Mayaram, SecretaryMinistry of Finance, but by the time the official gazette was issued, Shri Arvind Mayaram had retired and Shri Rajiv Mehrishi was appointed as the new Secretary, Ministry of Finance, so in 2015, new One Rupee Banknotes with New One Rupee Coin 2015 with the symbol of Rupee and L inset with colour was issued after a gap of 20 years. On 13th February, 2015, New Rupee banknotes was officially issued to general public and for the first time One Rupee Star Replacement series of banknotes was also issued with prefix 00F. 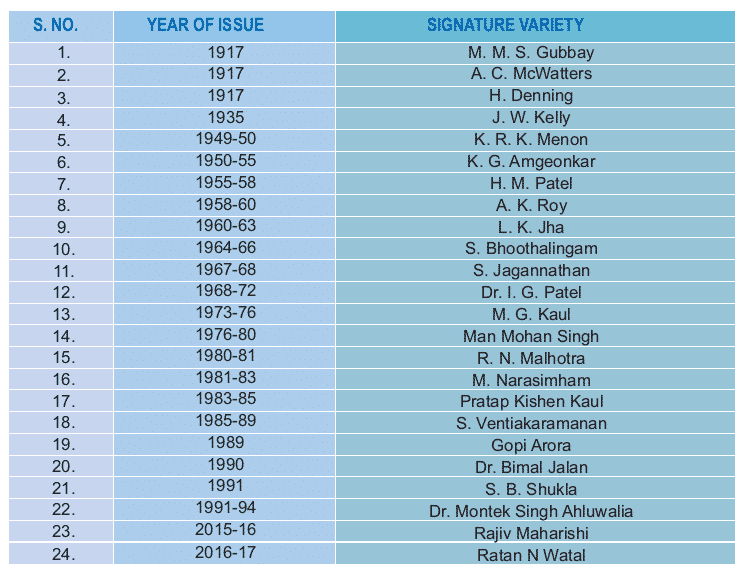